Since his death on Saturday night, remembrances of Jimmy Piersall’s colorful life have reexamined his nervous breakdown as a Red Sox rookie in 1952 and renewed appreciation for the way he played the outfield upon return.

Some rely on word of mouth, while others employ analytics to describe and demonstrate how Piersall’s guile and glove kept him in the big leagues for 17 seasons, despite volatilities that included a fluctuating batting average.

But for me, word of Piersall’s passing didn’t conjure up the image of a fleet center fielder running down fly balls at Fenway Park.  My first thought was of a clumsy slugger taking oversized cuts along the Mississippi River.

His name was (is) Alex Cabrera.  And if you saw him in any of his 31 major league appearances, all with the Arizona Diamondbacks in 2000, you’d know exactly how Cabrera looked playing for Peoria six years earlier.

Cabrera was then the property of the Chicago Cubs and a Class A prospect whose every trip to the plate epitomized cliches like ‘feast or famine’ and ‘all or nothing.’  Pitchers threw him something straight at their own peril.  By breaking one off, however, they added to their own amusement.

In his brief stint with the D-Backs, Cabrera homered every 16 at-bats but fanned in nearly a fourth of his other trips to the plate.  For every prodigious hit there were a fistful of ugly swings.  And misses.

So it was in the summer of 1994, when Piersall was roving between Cubs’ affiliates as an outfield instructor and moonlighting on radio.

From 1977-81, Piersall had partnered, both famously and infamously, on White Sox telecasts with the legendary Harry Caray.  But outspokenness and too-frequently-unfiltered opinions eventually forced Piersall out of the booth.  The title of his 1985 book said it best.  The Truth Hurts.  Often, the pain was self-inflicted.

Not that Jimmy stopped calling it as only he could see it.  Even while coaching, he appeared regularly on Chicago sports-talk radio.  When Piersall’s travels took him to the Midwest League, he pulled up a chair in the booth of the Peoria Chiefs.

The Chiefs were property of the late, great Pete Vonachen, who was every bit the outsized personality as his close pals Caray and Piersall.  Pete introduced Jimmy to the twenty-something calling games for his club — me! — and offered a standing invitation to sit in on broadcasts.

So Piersall spent pregame hours on the field with the Chiefs.  One of them, Dan Madsen, later made a name for himself in scouting by signing Dustin Pedroia for the Red Sox.  Another, Bo Porter, became manager of the Houston Astros.

Following warm-ups, Piersall put down his fungo bat, showered, changed and took a seat next to mine.  No different than when working with Harry on Chicago’s Southside, Jimmy aired whatever crossed his mind.

One early-May afternoon, Piersall was sitting in Davenport, Iowa, where the Chiefs were playing the Quad City River Bandits and Alex Cabrera was in full, free-swinging form.

As one of the few Chiefs with facial hair, Cabrera’s dark mustache lent years to his listed age of 22.  And at 6-2 and 217 pounds, he seemed even larger.

Cabrera’s swing must have been what poet Ernest Lawrence Thayer imagined for the Mighty Casey.  When he cut it loose, usually air (was the only thing) shattered by the force of (his) blow.

Every now and then, like in the game at Quad City, Cabrera flailed away to somehow contort his body into both a jackknife and corkscrew.

Having done that to corner himself into a two-strike count, Cabrera was fed another curve ball.  In his haste to devour it, he uncorked his massive right-handed cut.  Cabrera’s backside jutted toward the third-base dugout, while his head snapped hard over his left shoulder and his eyes rolled toward the sky.

With his weight pulled forward, Cabrera’s hands lunged high over the top of the off-speed pitch descending to the dirt.  The Mighty Alex had struck out.  Again.

So the author of The Truth Hurts lashed out.  Again.

“Will you look at where his ass ends up on that swing!” Piersall exclaimed, before muttering something not nearly as memorable as the three-letter synonym for someone’s posterior.

Remember, this was 23 years ago, when the a-word — believe it or not — was seldom heard on the radio.  Especially on small stations broadcasting to the Heart of Illinois.

The half inning ended, we broke for commercials and Jimmy removed his headset.   I needed mine on to stay in touch with the studio back in Peoria.  That day the young producer — probably no older than his late teens — was all but flipping out, fearful that we’d just run afoul of the FCC.  Which made two of us.

Jimmy couldn’t hear both sides of the conversation, but he did infer what was being said by the other party from my reactions and replies.  After 60 seconds or so, Piersall put his headset back in place and the bottom half-inning began.  Before I could re-set with the score, Jimmy interrupted.

“What’s wrong with the guy in studio?” Piersall asked, smiling slyly, as the first pitch went by.

“Hasn’t he ever read the Bible?” he continued, as the next pitch reached the catcher.

“Doesn’t he know about the story of the ass?” Jimmy quipped, quoting the King James and citing from the Book of Numbers while describing the so-called game of numbers.

It was his way of saying, “Relax kid.” 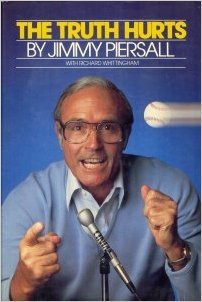 About a month later, Piersall re-joined the Chiefs in South Bend, Ind. for a series against the Silver Hawks.  I remember it well, because of the white Bronco.

It was June 17, 1994, and as Piersall hit fly balls to outfielders during batting practice, the radio station blaring out of the P.A. speakers broke into music with breaking news bulletins.  Wanted man O.J. Simpson was riding in Al Cowlings’ car, being chased by the California Highway Patrol on the Santa Ana Freeway (5).

In that ‘where were you when?’ moment, I was in foul territory, a few steps from Jimmy Piersall.

Later that year the Chiefs changed their affiliation from the Cubs to Cardinals.  Before they did, Jimmy gave me one more memory to hang on to.  He was talking to someone in the press box before a game and motioned in my direction.

“This kid’s going to be in the big leagues someday,” Piersall declared.

Maybe Jimmy was just trying to help me believe I could talk my way out of ‘A ball.’  But if it that’s how he honestly felt, that aforementioned book title was a bit of a misnomer.  Either way, the kind words meant a lot.  They still do.

Jimmy helped me learn about the game and kept me entertained.  He made me laugh and occasionally caused me to cringe.

Of course, I never would have experienced all of that if a young Piersall’s personal fear hadn’t met the same fate as so many Alex Cabrera at-bats — by striking out.