Skip to content
The following was originally posted to “Socci’s Notebook” on http://www.985thesportshub.com.  During his 3 1/2 decades with the Patriots, Dante Scarnecchia proved to be more than one of “the very best assistant coaches ever.”  He showed that one could coach a physically demanding position in a violent game with an uncompromising toughness, all while remaining unfailingly humble and kind. 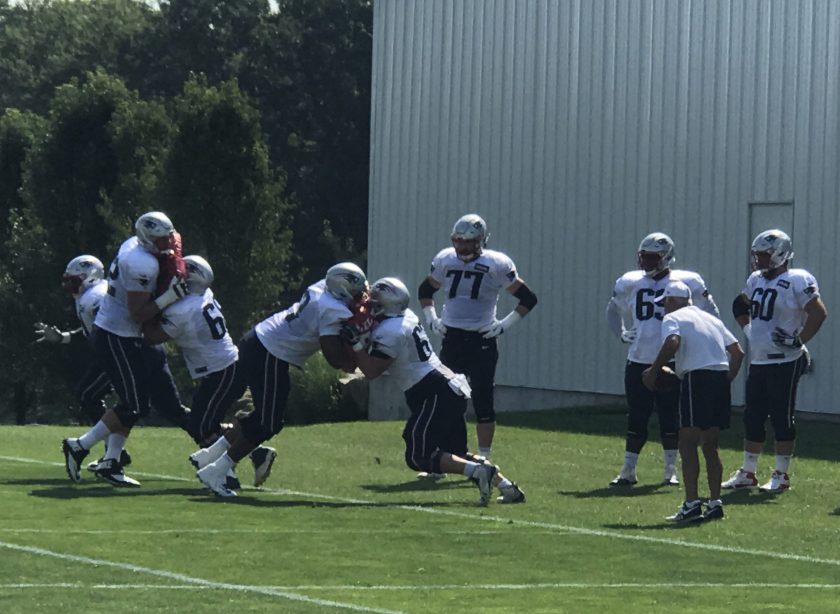 Shortly after returning from his first retirement to resume a three-decades-long career coaching in New England, Dante Scarnecchia sat in the television studio beneath the East stands of Gillette Stadium.

Hardly one to ever seek any special attention, much less before a camera lens, Scarnecchia agreed to discuss why he stepped aside two years earlier and what led him to rejoin Bill Belichick’s staff full-time in the spring of 2016.

What’s resonated ever since, however, is something he said about the period in-between, when Scarnecchia did his once-and-again boss a solid by scouting offensive line prospects for the NFL Draft.  Sharing his philosophy from that experience, Dante kept it as uncomplicated as the plain, gray t-shirt he was wearing.

“I think that’s the way you have to approach it. And I think that pretty much nails it down.”

As simple as that from the straightforward Scarnecchia, who paired a proverbial hammer with his coach’s whistle and always seemed to strike the nail on the head. On practice fields. In meeting rooms. During interactions with others.

On Tuesday we learned that Scarnecchia can now put those tools of his trade away. He is retiring little more than two weeks before his 72nd birthday and following 36 seasons in the NFL.

All but two of those were devoted to the Patriots, under five head coaches and on five Super Bowl-winning staffs.  And for most of them, the diminutive Scarnecchia stood tallest among giants, as one of the game’s best offensive line coaches.

Here at home, the team’s press release announcing Scarnecchia’s retirement included statements by Belichick and owner Robert Kraft. Belichick regarded him “among the very best assistant coaches ever,” while Kraft recognized “his contributions to our team and to the game of football [as] unprecedented over the last four decades.” Meanwhile, numerous Patriots paid their own tributes across social media.

Outside of New England, Scarnecchia earned equal measures of respect. I know so, because I’ve heard so.

Seven years ago before becoming part of the Pats’ radio broadcasts, I reached out to one of the wisest football men I’ve ever met, former Packers general manager Ron Wolf. I’d known him from my previous stint at the Naval Academy and valued his advice.

“Get to know the offensive line coach there,” suggested Wolf, who, like Scarnecchia, speaks in no uncertain terms. “He’s as good as there is.”

And several weeks ago on The Gridiron and Beyond, I asked Paul Alexander, who mentored NFL offensive lines for a quarter-century, about his coaching contemporary.

Alexander alluded to the Patriots’ history of often drafting linemen in mid-to-later rounds and relative frugality regarding free agents. All while retaining worth as a perennial playoff team.

“They value that position as something that can be coached, something that can be developed,” Alexander noted. “You can’t do that unless you have an outstanding offensive line coach. And they do. They know that [Dante] can take what’s given to him and make it work. To me, of all the great things you can say about him, that’s the greatest.”

Scarnecchia did it with the ex-college wrestler, who developed into a rock-solid guard and two-time champion. With the left tackle whose punch exceeded his reach, whose arms were seen short for the position yet fit perfectly into the sleeves of a Patriots Hall of Fame jacket. And with the most recent Super Bowl winner, whose center went undrafted, whose right guard was schooled in the triple-option, and whose left tackle was essentially written off by his previous team.

Provided one was smart, tough and athletic; determined to work hard; and willing to be coached hard; Dante could make it work.

A student of military history whose foray into college coaching coincided with his time as a Marine Corps reservist in the early 1970s, he commanded attention and respect on the field. And demanded excellence.

In his biography, My Life On The Line, ex-Patriots lineman Ryan O’Callaghan told of his rookie indoctrination in 2006. Right out of Cal, he had to overcome a huge learning curve to contest for a starting job in place of injured Nick Kaczur.

“Scar was the offensive line coach for the Patriots when I got there,” O’Callaghan explained. “He’d helped keep Tom Brady upright through their Super Bowl runs, and he’d have the gig for a hundred years if he could keep that going.”

Scarnecchia got O’Callaghan going fast enough and far enough to start the season opener vs. Buffalo. On game day, the teacher summoned the pupil for a one-on-one meeting. It included film review and a parting word to the wise.

But as much as Scarnecchia unyieldingly demanded from his players, he gave what he got.

They were conditioned to play fast at the game’s highest level. Yet nobody was in better shape than their coach. Watching training camps through the years, it was common to see Scarnecchia out front of the offense when running penalty laps; charging from his 60’s into his 70’s.

It was no different with other aspects of their professional and personal being. Scarnecchia expected total commitment from them. In return, they received the same from him.

It’s something O’Callaghan conveys as well in the book he co-authored with Cyd Zeigler, detailing his struggles associated with leading a closeted life as a gay man in the NFL.

“He genuinely cared about his players. He was interested in us as people, in our personal lives, and in what made us tick,” O’Callaghan writes. “He had a house on Narragansett on the coast of Rhode Island, and he’d invite linemen there just to spend time with him and his wife and build a deeper relationship.

“I actually felt a sense of loss by not being able to share who I really was with Scar. Looking back at it now, I probably could have.”

If there’s anywhere anyone should feel free to be their true selves, it’s around someone like him — his own man.

Truth is, as I wrote on Twitter Tuesday night, there can’t be a better example in football of someone who combines toughness with kindness.

In an age of blathering bluster, Dante Scarnecchia coached one of the most physically intense positions in a violent sport without an ounce of false bravado. He’s always carried himself humbly, treating others — including those of us outside the team’s inner circle — with dignity and respect.

Surely, he’ll be missed after bringing so much to the table.

The kind of guy we’ve all been lucky to have around — a renaissance man; a gentleman; a husband, father and grandfather — can now dedicate more of himself to other interests and more important loves than football.

Wish him the best. He’s earned it.