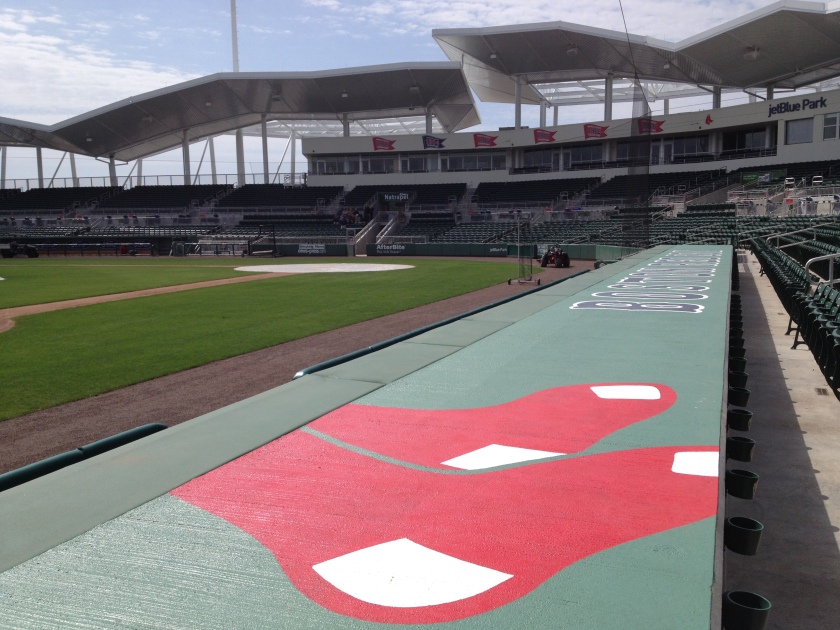 As you’ve (hopefully) noticed, I’ve been away from this blog for a while, wrapping up Patriot League basketball for CBS Sports Network and embarking on my new radio role with baseball’s Pawtucket Red Sox.

And as part of the latter, I’ve been writing for the team’s website www.pawsox.com and my new blog, “Socci On The Sox.”  Before long, however, I look forward to sharing more observations about my sports world at large here.  Meantime, I’ll soon be copying past posts for the PawSox to this space, while generating fresh content for their site.  As always, thanks so much for reading. 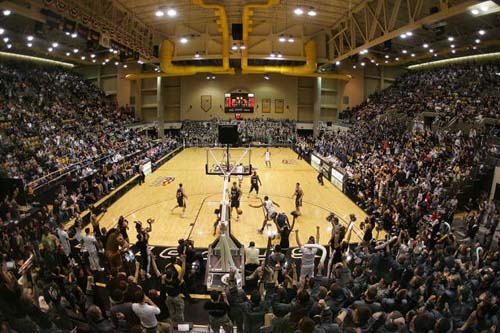 Practice began and ended the same way for Zach Spiker and the Army Black Knights.  The young coach huddled his team around him at midcourt, and reminded them of their goal for the following afternoon.

To the uninitiated, the sound of such a notion seems more than a bit strange.  Here was the coach of a basketball team that since the start of conference play has led its league in scoring, primarily because of its proficient three-point shooting, asking for — demanding, really — more bricks.

But at West Point, since the youthful Spiker became the Cadets’ head coach a week and a half before the start of practice in the fall of 2009, a brick connotes a much different meaning than anywhere else basketball is played.  Inside your local ‘Y’ or outdoors on nearby asphalt, the word is a universal descriptor for an ugly-looking shot.

A jumper from the wing so errant it, unintentionally, bangs off the backboard?  A brick.  A free throw that lands on the back iron with a loud thud, before rolling off right or left?  Uh-huh, a brick.  It never looks good, and usually sounds worse.

In Spiker’s way of thinking and speaking, the brick is raw material used to lay the foundation of a successful program.  It has nothing to do with offense, and everything to do with defense.

To Army under Spiker, a brick means three straight stops.  Hold the opposition scoreless on back-to-back-to-back possessions, and you’ve earned a brick.

The Black Knights led the Patriot League by averaging 71.2 points and 8.4 three-pointers per game, while shooting 39.5 percent outside the arc, in conference games this season.  But until a final score is reached, the real measure of their effort — applying full-court pressure on the ball with a deep rotation of well-conditioned Cadets — is the brick.

All year long there’s been a correlation.  Six bricks amount to victory.  Back in October, the overall objective for the coming campaign was 160.

By Spiker’s official count, the Cadets had 154 of them through their first 28 games, entering last Saturday’s regular-season finale at Lehigh.  Thus, to achieve both single-game and year-long goals, they needed six more bricks to add to all the others, labeled and stacked inside their locker room back at West Point.

Concretely or metaphorically, Spiker and his staff appear to be building something special.  He was hired off the Cornell staff, as an assistant to then-Big Red coach Steve Donahue, following the bizarre exit of his predecessor.  Weeks after signing a contract extension, Jim Crews was fired.  Little was said at the time — and less since, though Crews has gone on to succeed the late Rick Majeris at Saint Louis — about the reasons behind it.

Whatever they were, Spiker’s reality was obvious.  He inherited a veteran team in a program that hadn’t enjoyed a winning season since 1984-85 and had never reached .500 in Patriot League play, dating to 1990-91.  Though the Black Knights were 6-8 in conference each of Crews’s final two years, Spiker needed to create a pipeline of young talent that could withstand the rigors of service academy life and compete successfully at Division I.

Just as Navy had done under former Army assistant Don DeVoe in the 1990s, when the Midshipmen won three Patriot League titles, Spiker started recruiting to two rosters: the one at West Point and another at the academy’s prep school.  The latter would be essential for long-terms success.  It’s where players could form on-and-off-court bonds, become exposed to strict military and academic standards and improve their skills in a basketball system similar to the one Spiker was implementing on the Hudson.

Three years later, that effort is finally paying off.  In the form of bricks — productively, not pejoratively — and victories.

When Spiker addressed his team last Friday on the eve of its nationally-televised appearance at Lehigh, the Cadets were riding a school-record five-game Patriot League winning streak.  They were assured of Army’s first non-losing finish in 28 seasons.  And they already clinched the academy’s first winning league record since 1987, when Kevin Houston led the country in scoring and West Point belonged to the Metro Atlantic Athletic Conference.

None more than five-time winner Kyle Wilson, Army’s highest-scoring freshman since 1992-93.  On Monday, he was announced as the Patriot League’s Rookie of the Year.  Classmate Kyle Toth joined Wilson on the All-Rookie team.  That same day, Ellis repeated as a first teamer and Spiker was recognized as conference Coach of the Year.

The Cadets came up short of six bricks on Saturday, falling by six points, 81-75.  Nonetheless, at 15-14 overall and 8-6 in the Patriot League, their pieces are in place to keep building on what Spiker started.

“When we returned from our (late-December) trip to Texas, I told our guys that I believe we’re on the verge of something good here,” Spiker said last week.  “When we were 1-3 in the Patriot League, I told them that every goal we’ve set can still be achieved.”

Some, Spiker admits, would seem “a little lofty” to outsiders.  One has remained unrealized throughout the academy’s history.

Five schools who’ve played Division I basketball since 1947-48 have never appeared in the NCAA Tournament.  They include St. Francis (N.Y.), Northwestern, William & Mary and The Citadel.  And, of course, West Point, despite a history highlighted by the likes of Bob Knight and Mike Krzyzewski.  Knight left as Army coach to lead Indiana to three national titles.  His former point guard, Kryzewski coached the Cadets to the 1978 NIT, before guiding Duke to four NCAA championships.

The idea of this year’s Black Knights finally playing well into March is more than a little lofty.  But thankfully for the rest of us, everything at service academies is a little loftier than everywhere else.

Starting Wednesday, when it hosts American in the quarterfinals of the Patriot League Tournament, fourth-seed Army is three wins from the unprecedented.  Or, to see it as Spiker does, at least 18 bricks away.

Two weeks ago in Washington, his Cadets beat the Eagles, 72-58.  By doing so, they snapped a 14-game losing skid at AU’s Bender Arena.

They did it with a season-high eight bricks.

Bob is the radio voice of Navy football and called play-by-play for the Midshipmen in basketball for 12 years.  He and partner Chris Spatola (West Point ’02) will call a Patriot League semifinal Saturday at 4:30 p.m. Eastern on the CBS Sports Network. 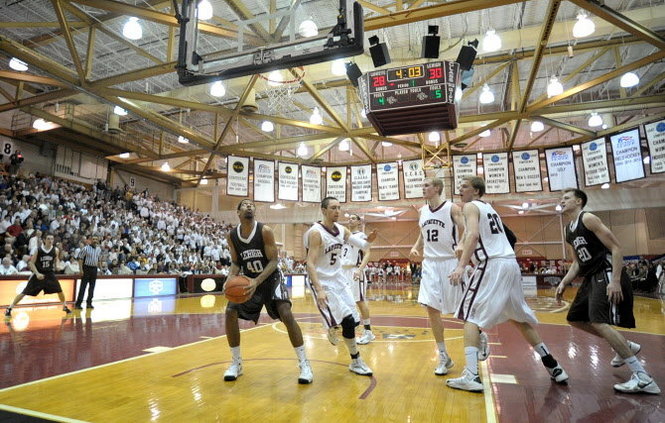 Shortly before stepping into the center circle for the opening tip-off, Jeff Clark nodded, smiled and extended his right hand.  Wearing his black-and-white stripes, with a whistle hanging from his neck, Clark was dressed and accessorized for work.

So was I, standing at mid-court, in my navy blue, network-issued blazer.  Any minute now, I was going to turn to a camera, raise a microphone affixed with a “CBS Sports Network” flag, and welcome a national cable audience into the intimate Kirby Sports Center in Easton, Pa.

Pleasantries taking precedence, I first reacted to Clark’s cue, and stuck out my own right hand.

“I saw you working Georgetown-Syracuse yesterday,” I told him, approvingly.  “Wow, that was quite an atmosphere.”

Sixteen hours earlier, and several hours to the north, Clark was one of three officials who took the floor with the Hoyas and Orange in front of 35,012 — the largest on-campus crowd in college basketball history — at the Carrier Dome.  In, presumably, Georgetown’s final visit to Syracuse, due to the unraveling of the Big East as we knew it, the Hoyas triumphed, 57-46.

True to the history of one of the most star-studded and compelling rivalries in the game’s modern history, Otto Porter scored 33 points to help end the Orange’s 38-game home winning streak.  Thirty-three years ago, G-town closed the ‘Cuse’s prior hoops residence, Manley Field House, by halting a string of 57 straight home victories.

Clark’s smile, like his eyes, widened.  He circled his finger, pointing to the wooden bleachers overlooking both sidelines and one of the baselines.  They were filling fast in the final minutes of last Sunday morning, as longtime adversaries Lehigh and Lafayette went through warm-ups.

“So is this,” Clark replied, enthusiastically.

So what if there are 31,000 fewer fans than where he worked the day before.  In its own way, this environment is equally exciting.  In every way, this game is equally important.  That’s what Clark seemed to be saying, without actually saying it.

He was right, of course.

The game we were both about to call — with Clark’s version, unlike mine, impacting the event — wasn’t one of the last episodes of a long-running series.  It wouldn’t affect national rankings.  And no attendance records were being shattered.

There also just so happened to be a common ingredient off the court.  At each venue — one a cavernous stadium, the other an intimate gymnasium — humans masqueraded as fruit.  In Syracuse, Otto the Orange bobbed around behind the backboard.  In Easton, kids literally went as bananas in the student section.

Meeting for the 216th time, in a series summed up along a short stretch of Pennsylvania highway as ‘The Rivalry,’ Lehigh and Lafayette staged a performance worthy of their predecessors.  The Mountain Hawks led at the half, living mostly on the inside.  The Leopards rallied, relying in large part on their outside shooting.

In their final regular-season appearances opposite an arch rival, Lehigh’s Holden Greiner scored a career-high 27 points and Lafayette’s Tony Johnson matched a personal best with 29 points.  Greiner made 10-of-14 shots, while Johnson converted 10-of-12, including all five three-point tries.

Less than 11 minutes left, the Hawks led by 10.  Another 9 1/2 minutes later, the Leopards held a 10-point lead.  The final was 79-71, giving Lafayette a sweep of the season series and a hold on second place in the Patriot League standings.

There’s a strong possibility of a rematch in the upcoming conference tournament.  Just as there was three years ago, when Lehigh beat its cross-Valley foe to earn its way into the NCAA Tournament.  If such circumstances realign, whether in the Patriot League semi’s or championship game, we’ll be treated to great theatre again.

Exactly as fans enjoy in the small gyms that house annuals like Calvin and Hope, and the mammoth arenas that stage made-for-TV spectaculars like Georgetown-Syracuse.  The Patriot League has Lehigh-Lafayette, as well as Army-Navy, which occupies a place made unique by both the history and meaning behind it.

The last few years, a third matchup within the conference has become worthy of marquee billing: Lehigh vs. Bucknell.  They first met in 1902, and have since accounted for the last three league championships.  They too could be headed for a tournament collision, like last March, when the Hawks won a thriller for the conference title.

Whether or not 2012 repeats itself in 2013, the next couple of weeks will lead us to a special place.  Whomever is at play.  Wherever they meet.  And whoever is there to see it.

That’s the nature of these great games, this wonderful time of year.

Rivalries may all be relative.  But the beauty in each is absolute.

On Saturday, March 2, Bob and broadcast partner Chris Spatola return to the Lehigh Valley to call the Patriot League regular-season finale between Lehigh and Army.  Coverage begins at noon, on the CBS Sports Network.